Countertops - Step by Step / From Sourcing to Installation

I have an old butcher block table that I had originally thought I would cut up into pieces, and use as my countertops.  I still think it was a fabulous idea except for the fact that I never measured to see if it would actually work.

But, I didn't, and it wouldn't; and so like many other tiny house projects I was left back at Square One and searching for a cost effective and not-too-complicated answer to my countertop dilemma pretty late in the build process.

As you know by now, I am always on the hunt for sponsors for my tiny house but most of them had already been found and were on board with the idea long before I started my build.  With the countertops, however as I mentioned, it was very late in the build process when I discovered I would need a new solution. 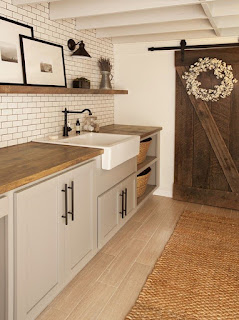 Just down the street from where I live, there lives a cabinet maker.  On three different occasions I have stopped by and we have chatted.  I have given him my contact information and he said he would "stop by to take a look later in the week". I talked to him about my kitchen cabinets, about my fender boxes, and then about my countertops. All 3 times he failed to follow up and it left me with a bad taste in my mouth for "buying local". Never once had I mentioned that I was seeking sponsor so its not like he didn't want to subject himself to an uncomfortable conversation of saying "no".  As a matter of fact over 50% of the cash I spent on my build was for labor that was NOT sponsor provided.  I had money, I just needed help.

I mention this only to illustrate a point about integrity. More than a few times people would say they would show up, follow up, bid on, or help me. And, more often than not, they didn't.  Seriously  More than half of the time, people didn't show up, even when there was money to be paid.

Integrity Matters!  It matters to me and it matters to most.  So, from here on out if you do not want to help someone or participate in their project, just say no.  I know I would respect you far more for your honesty than your lack of support or enthusiasm.

How I Found and Installed Recycled Countertops in 5 Easy Steps!

Step 1 - I found Aaron and Oregon Lumber Works on craigslist.  I emailed him.  He responded.  We chatted.  I told him what I needed.  He invited me to stop by.  It was that simple. 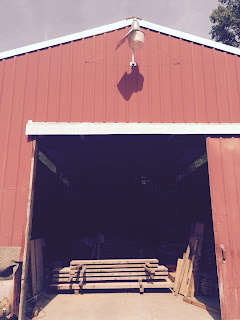 A barn full of reclaimed goodness.

And speaking of simple there is nothing terribly complicated about buying some reclaimed slabs and then installing them.  Assuming, of course, your measurements are right.....and mine weren't.

Oregon Lumber Works takes old barn beams and mills them into thick slabs to be used for table tops, countertops, shelving, desktops, and what ever else you can dream up for them. They don't look like much when you see them but if you have a vision (and I did have THAT!) and some mineral oil, they'll look amazing with little to no effort. 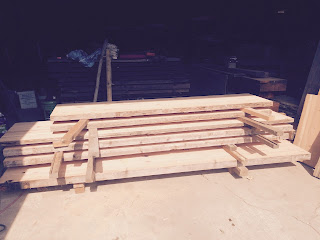 Step 2 - I picked out two slabs and hauled them home in my SUV.  I then measured the width and, as it turns out, I was off by 1/2".  So, the 18" wide slabs would need to be ripped to fit and since they had to be cut to fit, anyways, that was not a big deal.  I, however, was not going to tackle the job. 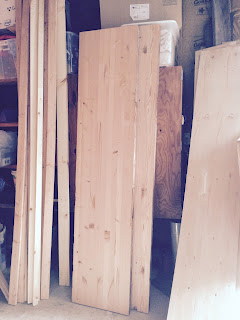 In my garage, awaiting their fate.

Step 3 - Cutting milled slabs that are practically irreplaceable in an area like a countertop that is the very definition of "visible" was not in my handy bag of skills.  I hired a local contractor to come cut the slabs to size. It cost me $40 and a few hours later I saw him at the wine bar "reinvesting" my keep-it-local money. 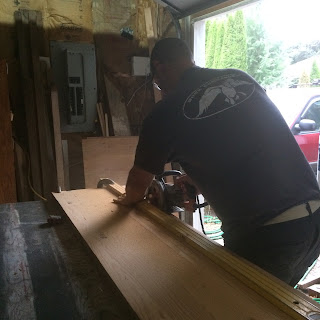 Step 4 - I sanded the slabs and added six coats of mineral oil that I bought at Walgreens for $2.65.  I waited 24 hours between coats, and now, liquid beads off them like water off a duck's back. 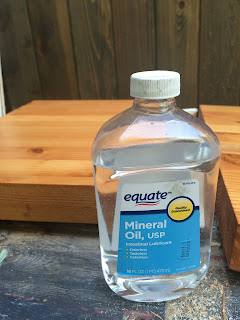 Sold as an "digestion aid" at your local pharmacy.
Step 5 - I now had two beautiful slabs so I just had to figure out how to support them on the non-wall side. So, I built two short walls, the width of the countertop, as supports.  I originally covered the half walls with barn wood but didn't want to waste such beautiful material on a wall you couldn't see so I ended up covering them with plywood and painting them instead.

I am VERY happy with how my countertops turned out and KUDOS to Aaron for his help.  They look amazing and go very well with my vintage appliances. 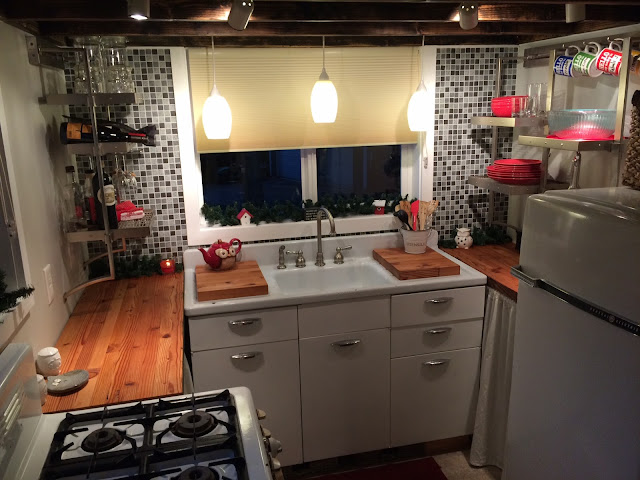 If you're looking for a company that is actively involved in the reclaiming industry and doesn't have an expensive store front, Oregon Lumber Works is a great source. Their website is basic, they run ads on craigslist, and Aaron is a supporter of all things tiny, small, and reclaimed.

What's not to love about that?

Posted by Michelle Jonice at 3:00 PM 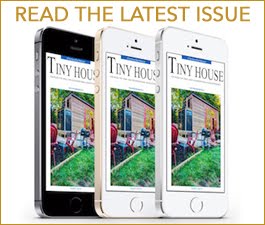 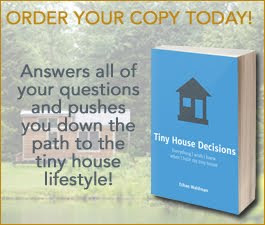 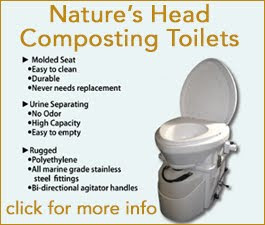